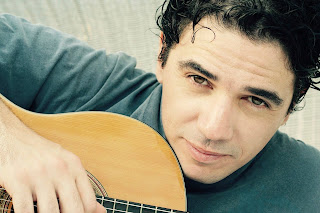 Alejandro Rowinsky is a classical guitar player, composer, arranger.
Born in Montevideo, Uruguay to a family of Polish/Spanish descent, he is a citizen of the United States where he has lived most of his life and currently resides.
He is active in the Central Florida music scene, having worked as a guitarist at Walt Disney World.
Classical guitar is the focus of his performance whose approach to World music also incorporates Flamenco, Tango, Latin American Rhythms and a blend of pop, rock, and electronic elements. Rowinsky explores his multicultural heritage through his compositions inspired by the works of Egberto Gismonti, Bach and Isaac Albeniz, and creates and develops his own creative musical style. He has toured extensively throughout the United States and his concerts often reflects his love of Latin American folklore, incorporating a mix of Spanish, Latin and world elements, strong melodies tinged with a shade of melancholy, with upbeat rhythms and original arrangements, classical masterpieces combined with electronics.

From electric to classical guitar

Alejandro Rowinsky was inspired by the Latin American guitar rhythms and the influence of the 80's Rock music. At the age of 17, he composed his first instrumental work and formed a Rock band named “Los Pajaros Pintados”).
He began his musical journey on the electric guitar, but Rowinsky’s real progress began after he meets and takes guitar classes with Uruguayan musician, composer and professor Amilcar Rodriguez Inda who immediately discovered his creative talent and encourages him the study of the classical music.
In 1996, Rowinsky wrote and recorded the music for the science documentary “Las Aranas Seres Increibles” (the spiders amazing beings) by the Investigator Roberto Capocasale. The film was showed by the Institute of Biological Investigations in Uruguay.

Later he is invited by JulioVictor Gonzales (ex-group Zucara) to take part of his band, he was the guitarist of the Folk band where he explored the music of Latin America and they toured throughout Uruguay. He also takes vocal classes with soprano Socorrito Villegas.

Moving to the United States

Alejandro Rowinsky decided to start a new chapter by moving to Miami, United States where he  began composing music, recording songs in Spanish and sharing venues with other local Latin musicians. While living in Miami, he takes master classes with Cuban guitarist Rey Guerra.
Musical environment, particularly in Miami is directly impacted by cultural influences and Rowinsky’s musical rhythms were starting to merge.
His musical world was divided and eventually merged between the composition of melodic songs in Spanish and the classical guitar from the Renaissance. By then, he had composed more than one hundred classical guitar compositions and more than fifty songs.
His last presentations in Miami before he was cast as musician in Walt Disney include but are not limited to: taking part of the performances series at Dr. D Conservatory of Music in Miami Lakes with Concert Pianist Jose Ignacio Diaz Gravier and his most notable fellow soprano singers and musicians; and performing at the opening event 2016 Florida Car Marathon at Miami Seaplane,  the annual event of Precision Car Rally.

Rowinsky auditioned for a musician role in Walt Disney World and after a casting process he is selected to be a part of the musical cast. He was the guitarist for the live performance presented several times daily on the Cinderella Castle stage in Magic Kingdom, "Princess Elena's Royal Welcome".

From that moment, new opportunities are therefore emerging and the development of a musical and performing career.
He is invited to play a guitar concert at Mise-En-Place, in New York. A contemporary classical concert series of works by New York-based contemporary music collective led by  artistic director Moon Young Ha.
Rowinsky got into the list of Nominee for “Guitarist of the Year” 2014 LA Los Angeles Music Awards.

Rowinsky represented Uruguay at the 2016 International Festival of Songs, Punta del Este, with the participation of  20 musicians representing countries from Latin America and Europe. At the Festival, he performed three (3) of his unpublished songs in Spanish language.
He is known for his passionate and inventive style, which explores connections between the various traditions of South American folklore, blues, rock, flamenco, contemporary music and electronic sounds.
Rowinsky has graces stages and performed extensively throughout the U.S., in various venues from Music Festivals, Shopping Malls, private events, to high-profile gala, and he  performed in numerous solo recitals as well as with chamber groups and band orchestras.
Aside from the concert stage he has entertained in private parties and events for prestigious personalities.
Additionally, his versatile performance repertoire spans over years of music covering the Renaissance, Baroque, Classical and Romantic eras as well as hits from the past 60 years. He skillfully turn any song into an instrumental guitar piece by retaining its familiar melody and harmony while gaining a charming elegance that is beautifully suited for any occasion.
Alejandro Rowinsky's sound is generally eclectic, though often described as atmospheric and emotional.

While he was listening a DJ at a recording studio, he started to play classical compositions with his guitar and the interest of bringing together the old and the new revolutionized his musical projects. Then, he began to work on developing his own musical style by integrating elements from the contemporary and classical worlds and creating an innovative sound, a blend of musical styles of classical and modern techniques with the interest in electronics. Rowinsky’s music composition blends the past and the present, multiple genres into his own style a fusion of classical guitar and electronics to create contemporary concert music. He is very interested in experimenting with electronics in his music to develop and realize new works of electroacoustic chamber music. Rowinsky writes pieces of music that uses flute, keyboard, guitar and electronic elements.
His music compositions were featured on the prestigious Facebook page with more than 2 million followers Ludwing Van Beethoven and gathered a huge fan followings too. He becomes worldwide known by classical music lovers, a fan base of enthusiastic, music-loving advocates from around the world. Within his ample repertoire the public will find classical masterpieces and delights with the rhythms of Flamenco, Latin pop, Tango, Blues, Bolero, and Song along with many other Latin American rhythms.

Aside from performing live and composing music, Rowinsky venture into the world of Theatre plays and Films. He takes part in the Tony Award Musical "Man of La Mancha"and appeared as the guitar player/featured musician onstage for the Spanish Lyric Theatre Company at the HCC Maintage in Tampa as well as for the Mad Theatre of Tampa Company at the Straz Center for the Performing Arts.

"This is Where it Began" is a public service announcement (PSA) that Alejandro portrays a father celebrating the birthday of her daughter. This PSA sponsored by the Florida State Council on Compulsive Gambling is about the Gambling Addition Awareness & Prevention.

In 2019, Rowinsky appeared on HBO TV Series “The Righteous Gemstones” S1, Episode 5. He was given the opportunity to be the electric guitar player for the 80's throwback scene. Singing and dancing from Jennifer Nettles and Walton Goggins, the original song "Misbehavin" was wrote for the show by creator Danny Mc Bride and co-star Edi Patterson.
2020-2021  - Musician at The Venetian Resort Las Vegas.
2021 - He appeared in the film "The Eyes of Tammy Faye" (starring Jessica Chastain and Andrew Garfield) as a guitar player in the band
as well as a PTL Club member.
2022 - Musician-in-Residence at Creede Repertory Theatre, Creede, Colorado. Rowinsky joined the show band of "Always...Patsy Cline" as guitarist, as well as the comedy "Native Gardens" playing the role of Surveyor/landscaper. 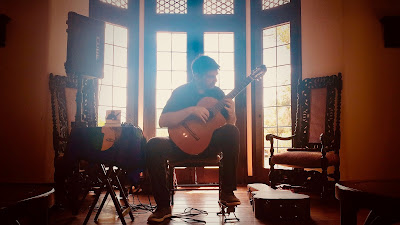